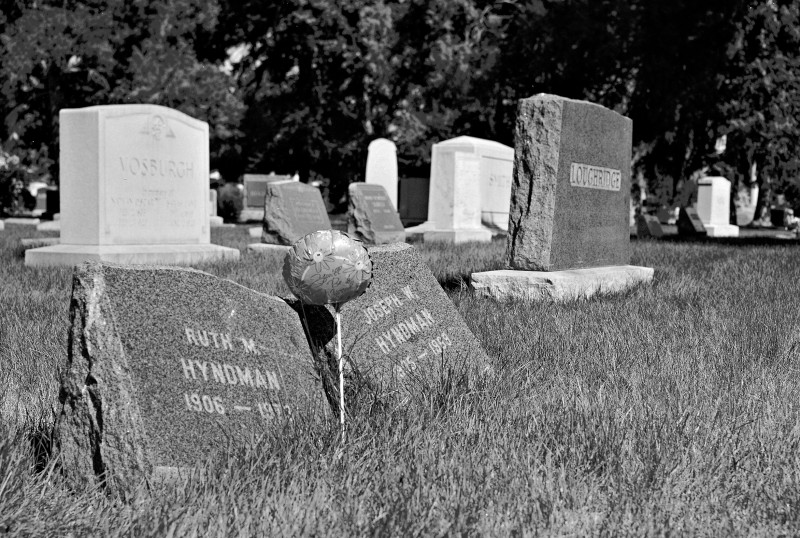 I like cemeteries.  Normally, I am found lurking in them at night, particularly those that have lights that create interesting patterns with benches and tombstones (see Lurking In The Churchyard).

One of the most interesting daytime cemeteries is Denver’s Fairmount Cemetery.  Constructed in 1890, its grounds contain the mortal remains of a wide variety of scoundrels and famous American citizens, including Lou Blonger (1849–1924), saloonkeeper, gambling house owner and kingpin of the Denver underworld, Junius Flagg Brown (1827–1908), founder of Denver Museum of Natural History, and Mattie Silks (1846–1929), famous madam.  A number of structures on the grounds are designated as National Historic Landmarks.  Of these, one of the most unique is the Little Ivy Chapel, constructed in 1890 and designed by architect Henry Ten Eyck Wendell. 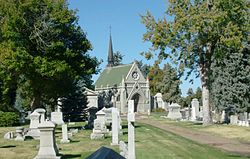 Wandering the grounds, I was struck by one pair of headstones belonging to Ruth and Joseph Hyndman.  Both tilted together as if they were sharing some secret or reclining affectionately together in the afterlife.  Touched, I read the inscriptions and learned that they were born within a year of each other and died, both relatively early in life, to be buried together with their headstones nearly touching.  I wonder- did they want to be buried that way, or did some lingering magnetism draw them together in the afterlife?

A little blue balloon, some child’s forgotten toy, was blowing nearby.  I rescued it and planted it between them, my gift to their party in the hereafter.

From a photographic standpoint, getting images with impact is all about picking out details, lines, and patterns.  Walking through a forest with a camera can be an overwhelming experience until you see one trillium, a unique group of skunk cabbage, or a flowing pattern of roots on a stump.  In this case, I noted a detail that stood out among the forest of headstones and seemed to tell a story.  The next step is putting the elements into the camera and onto paper in such a way that the story tells itself without words.  First you have to see the story, and then you have to figure out how to tell it by the way you balance the elements of the image.