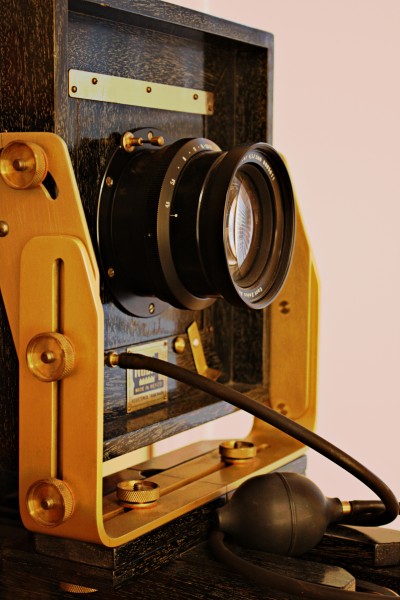 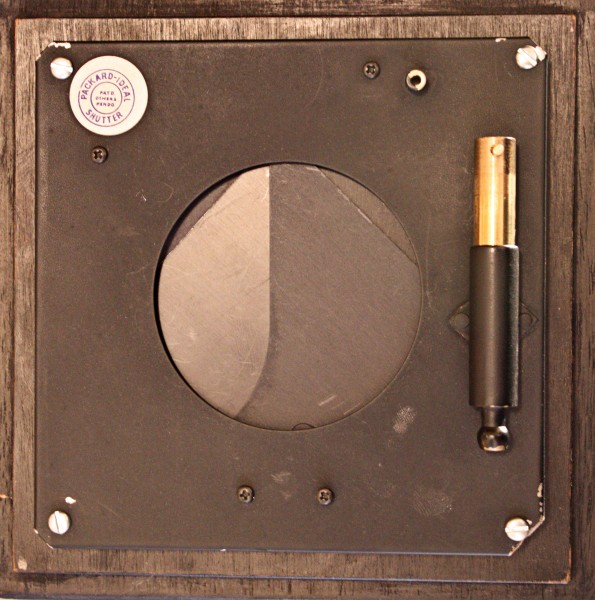 Completing our discussion of shutters requires mention of a famous shutter that, although most commonly found on large format (4×5 in and larger) cameras, nevertheless holds a firm place in photographic history: the Packard shutter.

Throughout the late 19th and early to mid 20th century, many fine lenses were produced without shutters; in modern terminology, these are referred to as “barrel” lenses. They were often designed for aerial photography (e.g. the Kodak 7″ f/2.5 Aero-Ektar), as industrial process lenses, or for use on cameras with alternate shutter types. Some, such as the lovely East German f/4.5 Tessars (see above), the Cooke Anastigmats, and the Zeiss Jena Symmars and Planars, have excellent optical qualities. Many of these classic lenses are of considerable size and can be lethal if dropped from a high place. Fitting a conventional shutter to many of these behemoths is a daunting and expensive undertaking.

Enter the Packard shutter. There are some inventions that are so basic, functional, and foolproof that they remain essentially unchanged for decades. One is the humble mousetrap; in its familiar form – pine board, pieces of wire, and a spring – it has been decimating those little furry pests, essentially unchanged since James Henry Atkinson patented the original “Little Nipper” in 1897. However, nowadays, the use of pest control spokane services, as well as a myriad of others, makes it easier for pests to be caught and eradicated in modern homes.

The other is the Packard Shutter. The origins of this humble device are obscure. A product of Yankee ingenuity, it is variously described as dating from the Civil War or originating “…in the late 1800s…” Consisting of a thin, flat metal case with a central opening and three blades driven by a simple air-powered piston, it is still manufactured by the Packard Shutter Company of Fiddletown, California. Its virtues are twofold: it is indestructible and virtually foolproof, and is almost the only way to use many fine vintage lenses that lack shutters. The only other alternative would be to use a focal plane shutter-equipped camera such as a Speed Graphic, but the lens boards on Graphics are frequently too small to accommodate these large lenses. Though typically found on large format cameras and thus technically outside the scope of this site, the Packard’s place in photographic history is so well established that no discussion of shutters is incomplete without it.

The shutter consists of a thin (1/4 inch), flat metal case with a central circular opening, containing three coupled blades of black fibrous plastic approximately 0.020 inches thick. The mechanism is activated by a simple non-lubricated, air-driven piston connected to a flexible air hose and bulb. Shutters are available with central openings ranging from 1 1/2 to 3 1/2 inches; larger sizes, which can be custom ordered, find application in astronomy and scientific work.

The blade mechanism consists of two leaves, separately pivoted near the bottom of the case. These overlap slightly at the center of the opening, but do not quite cover the top of the opening. Simultaneously, a “guillotine” blade moves down to cover the remaining area. The air-activated piston moves the guillotine blade (sometimes called the “master blade”), which is coupled to one of the vertical leaves by a small rivet: this first vertical leaf is then coupled to the other vertical leaf by a second rivet. In this manner, movement of the guillotine blade opens or closes all three blades.

“…This is my Packard shutter with the rear cover off. I’ve colorized two of the leaves to make it clearer. 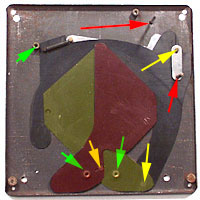 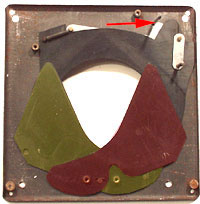 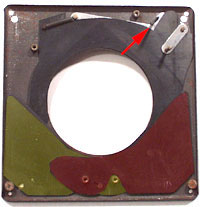 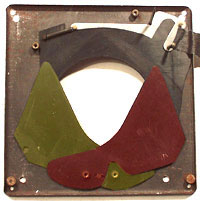 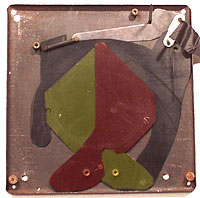 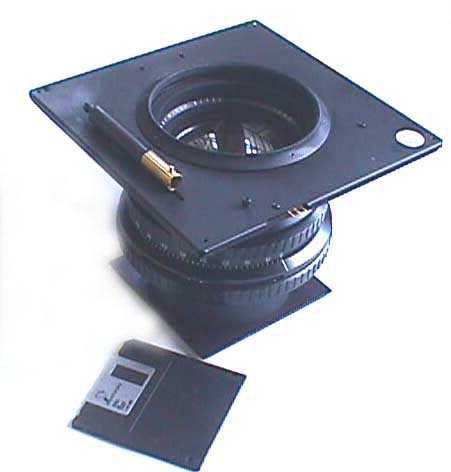 In the intermittent mode, the shutter speed of the Packard is usually considered to be 1/15 – 1/25 second with a determined squeeze of the bulb. There are references that suggest techniques for controlling the air flow for a variety of other settings. For timed exposures, the Packard company recommends the following procedure:

Were the Packard to be used on a roll film camera, the limited range of shutter speeds would be a significant limitation. However, in large format work where images are typically taken at small apertures and exposure times are longer, being limited to 1/25 second or longer is a restriction that one can usually live with, particularly if the Packard allows the use of an unusually fine lens.