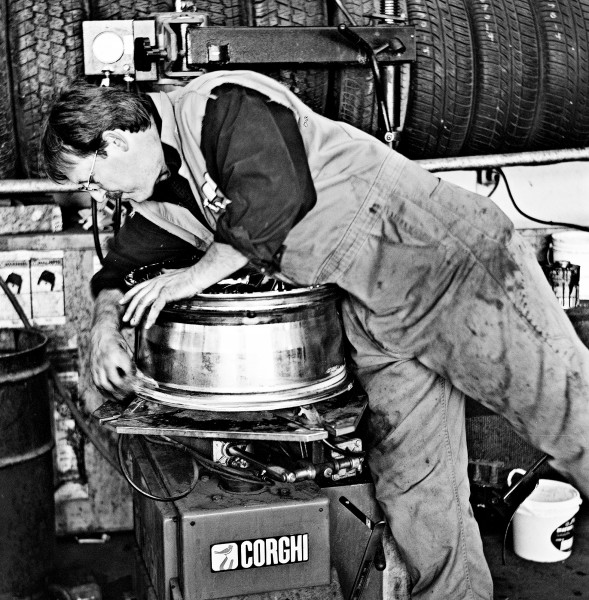 The ability to change formats is a desirable feature in a vintage camera.  Obviously, those with interchangeable backs, such as the Graphics, can readily use different formats.  In addition, a number of folding roll film cameras, such as the Voigtlander Bessa, have the ability to switch between 6×9 and 6×6 cm formats. Such cameras can be identified by the two red windows placed at different positions on the back.  Unfortunately, many manufacturers accomplished this goal using drop-in masks that are almost always missing, and templates for remanufacturing these masks are nonexistent.  However, a few camera designers, notably the British Ensign, used built-in flaps that are an intrinsic part of the camera.

Square format, besides stretching film, works well for street and people photography.  With the flaps in, the Ensign 820 yields 12 exposures on a standard roll of 120 film, and the format is ideal for this image of a tire technician bending over his machine.  I am always fascinated by the workers who form the foundation of our little town of Duncan, and Joe’s Tire Hospital has been an institution here for many years.  Joe is long gone, but Ken, the present owner, dispenses good cheer and sage advice on every topic relating to cars and rubber.  While getting my tires rotated, I seized this dynamic image of one of his staff preparing a rim.  The greatest difficulty with this shot was that the lighting, which came from one side through the open garage door and from overhead fluorescent lights, was of marginal intensity for a moving object, but f/8 and 1/50 second (on the slow side for a 100mm lens), plus a steady hand captured a sharp image when he paused over his machine.  Though low level, the light was soft and semi-directional, filling in the complex shadows and creating an image that required very little manipulation.