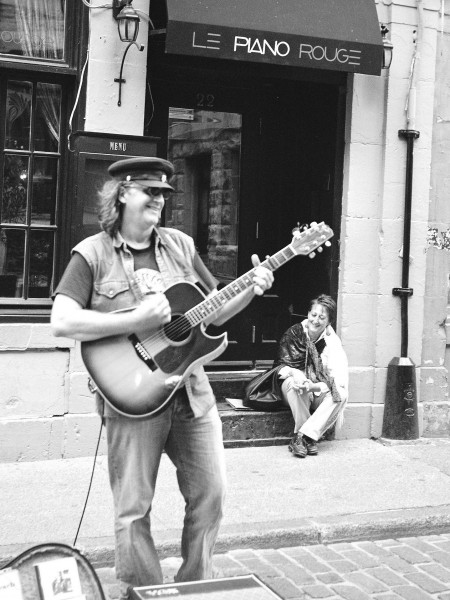 Seizing the moment is critical.  Montreal’s financial and Old Town districts are alive with street musicians, artists, and just plain quirky character of all descriptions.  Wander the streets with you camera in hand, shutter cocked and aperture set for sun or building shade, and be ready!

If you can, make your image tell a story – or better yet, make the viewer begin to tell his own story.  I managed to catch the energy of this busker by being prepared to shoot in an instant.  He was just setting up to play, so an interfering crowd had not yet gathered, and I managed to connect both him and his amused and admiring female friend in the background.  With this connection, the image begins to tell a story, and we begin to wonder about them.  Is she his girlfriend? Or just a passerby who stopped on the steps of Le Piano Rouge to watch?  Will they go inside in the evening to share an intimate dinner from his day’s busking?  These questions draw us in, make us linger, and make the picture greater than the busker himself.

Here, an eye level finder is a must.  Much as I love my cameras from the 19-teens and twenties, the tiny finders of that era, designed for waist-level use, are almost impossible to use accurately or quickly in a situation like this.  Most miniature plate cameras, and and a few of the 1920s roll film cameras, have folding wire finders that can be used for sports photography.  These function well in action situations, and have the added advantage of attracting interested bystanders, one of the most rewarding aspects of vintage camera photography.  Furthermore, most subjects are happy to be photographed by someone with such an unusual camera!

As with most of this Montreal sequence, this was shot with the Ensign 820 with the Ross Xpres lens on Ilford XP-2 at f/11 and 1/200 sec.  The image required only local contrast enhancement and minor adjustments for brightness, contrast and Curves despite the harsh summer light. 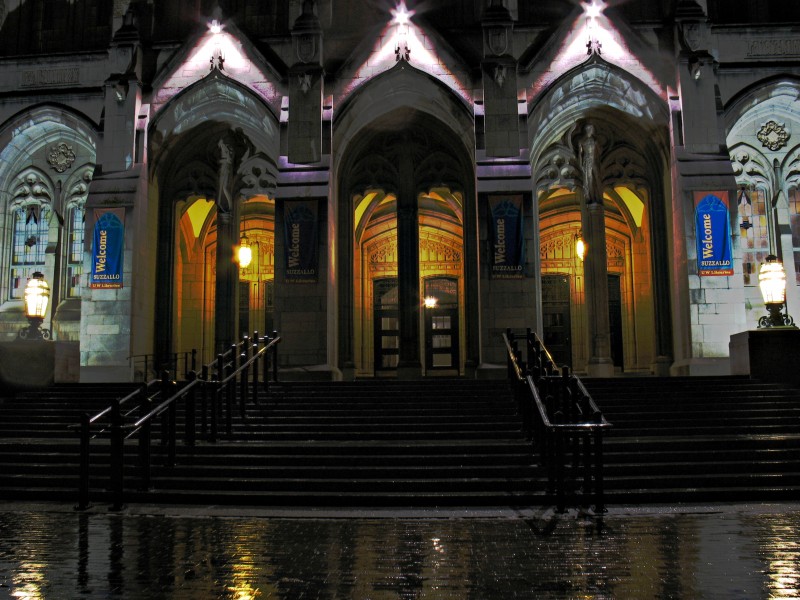 The Comanche, Navajo, Osage and Zuni danced for rain.  Ancient Romanian rainmaking rituals survive into the 21st century.  City photographers – at least those who work at night – also pray for lifegiving rain, not for their crops, but for their images.  Consider this photograph of the University of Washington’s Suzallo Library.  Ablaze with light, the door’s multifaceted image is repeated in the wet cobblestones of the pavement, and adds a whole new dimension to this dramatic entranceway.  Taken on a dry night, a later  image was lifeless. 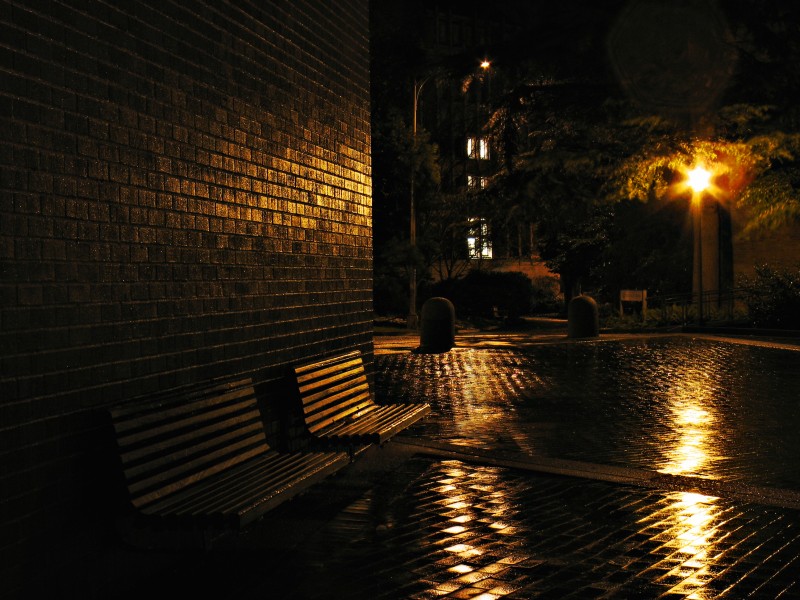 Around the corner, a pair of quiet benches forms the focal point of a study of a single street light’s reflections not only on the pavement, but also on the rain-soaked bricks of the wall and the slats of the bench.  Given enough water, almost any surface can become a reflective mirror that takes its place in the image. 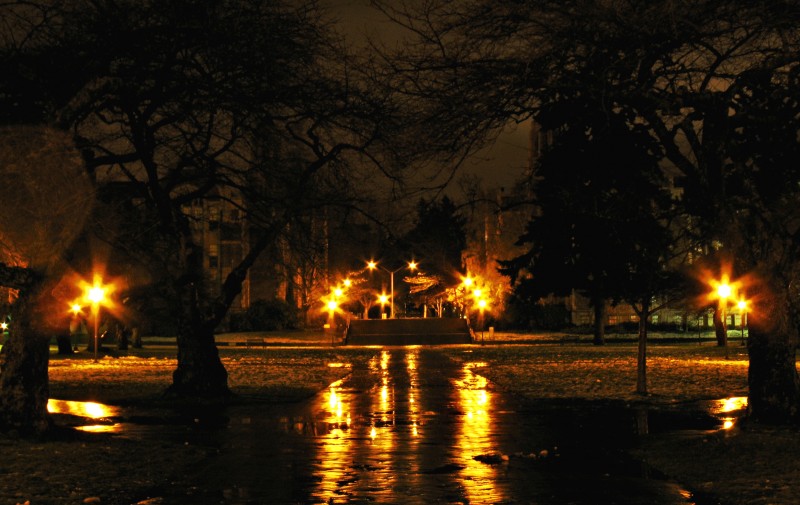 A mall walkway offered the most dramatic shot of the evening, with brilliant post lamps bouncing off puddles and patches of melting snow, framed by the naked branches of the mall’s cherry trees. 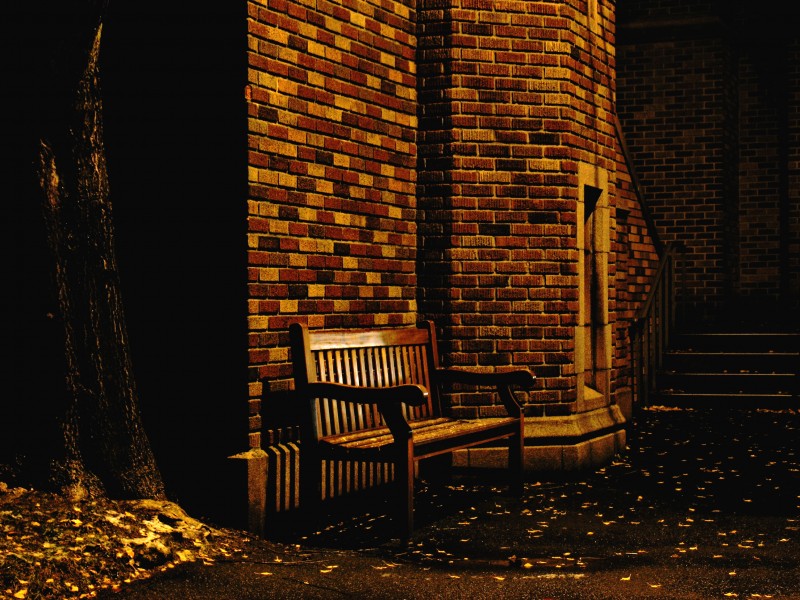 However, not all “wet” images need be as dramatic as this rainy mall.  In this quiet shot of a corner bench, there are no dramatic reflections from spot light sources.  Yet the rain gently accentuates every surface contour and alters colors, darkening the concrete to accentuate the sprinkling of leaves, bringing out the shape and varying colors of the brick, and catching the highlights on the bark of the single tree.  Moreover, the focal point of the image, the highlight on the back of the bench, is a direct result of the rain soaking the dull wooden surface.  This image would have had little life on a dry evening.

Many photographers rely completely on exposure data from their camera’s built-in light meter.  In today’s world of matrix metering on sophisticated digital cameras, this produces good results under many lighting conditions lighting conditions.  However, most early vintage cameras do not have light meters, and even a highly automatic light meter is not automatically right.  Experienced photographers frequently employ an extraordinarily useful rule of thumb known as the “Sunny f/16 Rule.”  This simple rule states:

“On a sunny day, for correct exposure, set the camera’s aperture at f/16 and the  shutter speed to the reciprocal of the ISO film speed.”

In other words, when shooting Tri-X, ISO 400, on a sunny day with no haze or cloud and a front-lighted subject, a perfect exposure will be obtained by setting the aperture to f/16 and the shutter speed at 1/400 sec.  For practical purposes, the nearest calibrated shutter speed of 1/500 will do fine.  For Panatomic-X at ISO 100 on the same sunny day, optimum exposure will be obtained with f/16 at 1/100 sec.  For other film types, just plug in the ISO film speed as the reciprocal of the shutter speed.

This rule is important for three reasons:

Incident Metering is a Bad Idea. Use the Sunny f/16 Rule

This rule can be tabulated for different film speeds as follows:

The Sunny f/16 rule can be extended to other lighting conditions, producing a table similar to that provided by many manufacturers on their film packaging:

An extremely detailed tabulation of empirical exposure settings for a variety of light conditions is available on Karen Nakamura’s Photoethnography web site under the “Exposure” tab. 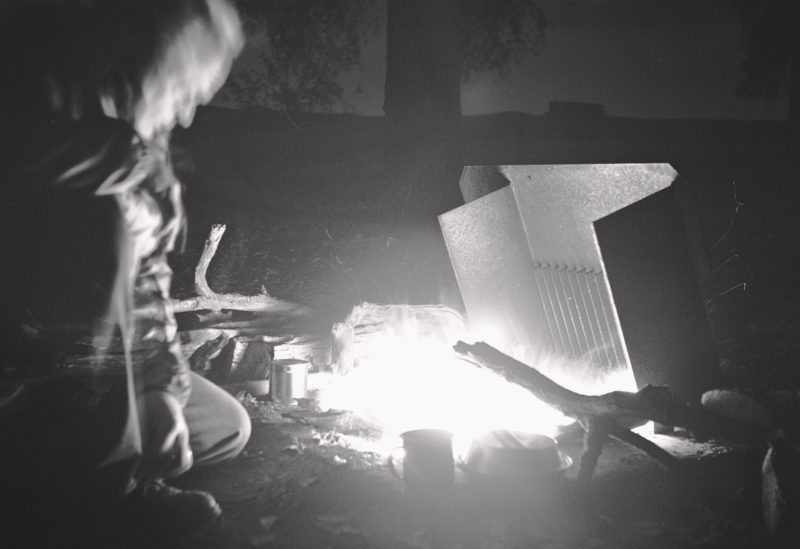 I do a lot of this. Lurking, that is. At night. And I have the images to prove it.

I honestly don’t think most people SEE at night. Otherwise, there would be crowds wandering deserted streets at night, exclaiming over the neon of an isolated roadhouse, or trekking mountain paths in the moonlight, marveling at the interplay of light and shadow in a moonlit glade.

Night brings out magical effects that most of us miss. Recently, I went for a walk at midnight in an aspen grove in Colorado. By day, this path wove through a pleasant but not particularly remarkable stand of trees bordering a wetland south of Denver. By night, as I walked along with the moon at my back, each tree glowed with a silver luminosity as if lit from within. Returning, the shadowed back of each trunk thrust darkly upward against the moonlit meadows. Each grove became its own composition of light and shadow, line and shape.

Night, however, is also the time of furtive assignations, secretive errands, and night stalkers. Photographing after dark, one becomes part of this world, with its sense of threat and mystery – and I love it. I feel at one with a long line of dark-coated, camera-toting figures lurking in corners, waiting for the mist to veil street lamps and car headlights. Peering through my viewfinder at an abandoned warehouse, I feel Brassai standing behind me, with his Voigtlander Bergheil slung over his shoulder and the sounds of 1930s Paris filtering through the fog.

Night photography requires dedicated, sophisticated, and well-planned lurking. One must haunt lonely alleys in the bad parts of town, street lamps in lonely alleys, the “Old Town” areas of many cities, and small towns in Kentucky at midnight. Being questioned by policemen is an occupational hazard, though most will dismiss you as a harmless eccentric when they see your camera and tripod– art is a socially acceptable form of lunacy.

The rewards are worth it, however. With my 1928 Kodak, I captured two bored pizza jockeys at an all-night pizza stand late one night in Seattle’s Pioneer Square.

Wandering Denver’s LoDo district on the 16th Street Mall, I caught this shot of my wife looking contemplatively into the windows of one of our favorite haunts, the Tattered Cover bookstore:

Janie at the Tattered Cover

If you really want to do good lurking, however, the best place is a graveyard.  Not only can you carry on the tradition of the legions of fine skulkers in the shadows of film and fiction, if there is any source of illumination, you may scuttle away into the darkness with some striking images.

St Mary’s historic Anglican Church in Metchosin, B.C. not only has a churchyard fill with pioneer headstones, it also has a perfectly situated spotlight illuminating the tombstones.  Meant to discourage vandals and beer-swilling teens, it casts a dramatic light over headstones, trees, and a quaint wrought iron bench.

Crosses in the Churchyard

The Bench in the Churchyard

My favorite image came when I noticed my shadow falling in the stone.  I initially struggled to maneuver around so that I could shoot the headstones without a shadow from either myself or my camera and tripod.  This was almost impossible at many of the best angles.  Suddenly, I saw my shadow fall outward between the stones, and that image capture circuit in my brain flashed on – make the shadow the image!  I stood over my tripod, superimposing my shadow over it, opened the shutter, and stood rigid for four minutes while the film recorded the tombstones disappearing into the darkness, my sinister shadow creeping between them. The Shadow in the Churchyard

Of course, safety is important. Remember that there may be more efficient lurkers than yourself, and don’t take unnecessary risks. Some of the best images are found in dark alleys and less-traveled parts of the city. Explore these areas, but use common sense. Don’t dress expensively, and don’t be obvious about fancy equipment. Pepper spray is a good photographic accessory. Know where your car is and how to get back to it. Carry a cell phone and small flashlight. In some areas, consider staying in your car.

I love these images.  Next time it’s dark, don’t just head off to the grocery store- stop and look around, and maybe wander a bit.  And if you notice a dark figure skulking about, check to see if it’s carrying an old Kodak before you whack it with your umbrella.