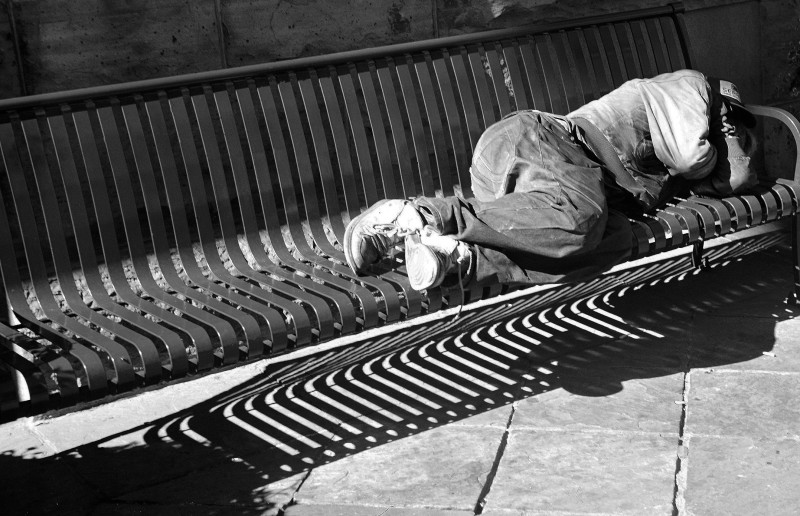 Another Image of a sleeping street person, this one from Denver, taken with the Ensign 820 and its Ross Xpres lens.  There is a certain intimacy one must get when shooting with a 50mm equivalent lens, in this case the 100 mm Ross.  One must be up close; you cannot stand across the street in comfortable anonymity and shoot unnoticed.

I cropped out unnecessary  pavement left and lower, then applied Local Contrast Enhancement, increased contrast overall to give the image “snap” and dropped brightness to enhance the brooding quality of the image. 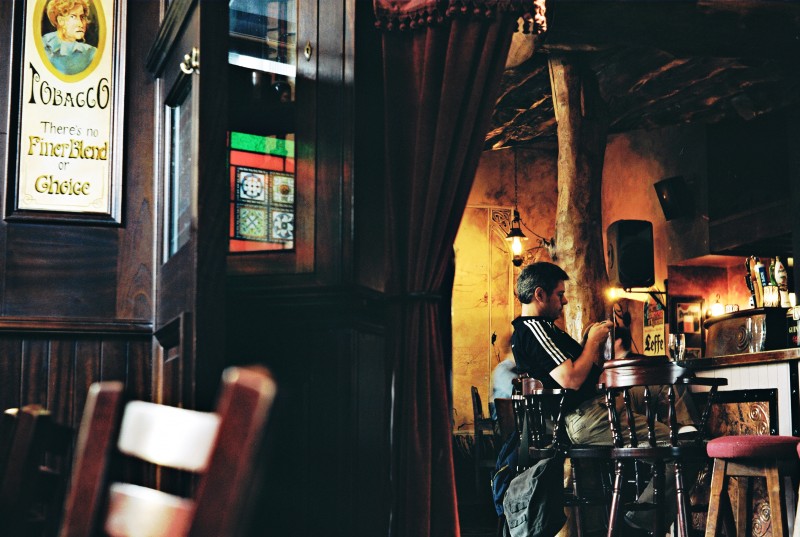 Thinking in the Pub

This image illustrates two points, both important to the photographer: first, look over your old work from time to time.  Your artistic vision changes, and the simple passage of time lends a new perspective on work that you may have seen only from a single viewpoint.  Second, play with pictures.  Some of my best images have come when I take a negative that looks second-rate and start cropping and playing with contrast and Curves.  Most often, the picture is trying to speak to me, and I’m not listening.

Another lesson: if you wonder if it’s worth trying a shot, do it!  At worst, you will waste some film.  The last three best Images I have done have all been ones in marginal conditions where I wondered if the shot was worth it.

I honestly do not remember where I took this image, or the settings I that used.  I would imagine f/5.6 at a moderately slow shutter speed of 1/10 or 1/25 second, with the Voigtlander perched as unobtrusively as possible on a table top.  Originally, I looked at the out-of-focus chair back and dismissed the image, then decided to play with it.  Cropping out extraneous detail on the right and bottom placed the subject more powerfully according to the Rule of Thirds, and adjusting contrasting, brightness, and Curves brought out the reason I was attracted to this scene in the first place: the gentle lamplight falling on this pensive subject in a pub.  Once completed, the lighting in this image reminds me of the way the old Dutch masters used light in their images.

So don’t let good images be lost in the dust of your archives- look, dig, think, and like so much in life, don’t be afraid to dive into an enterprise that might not work.  More often than not, you will be surprised. 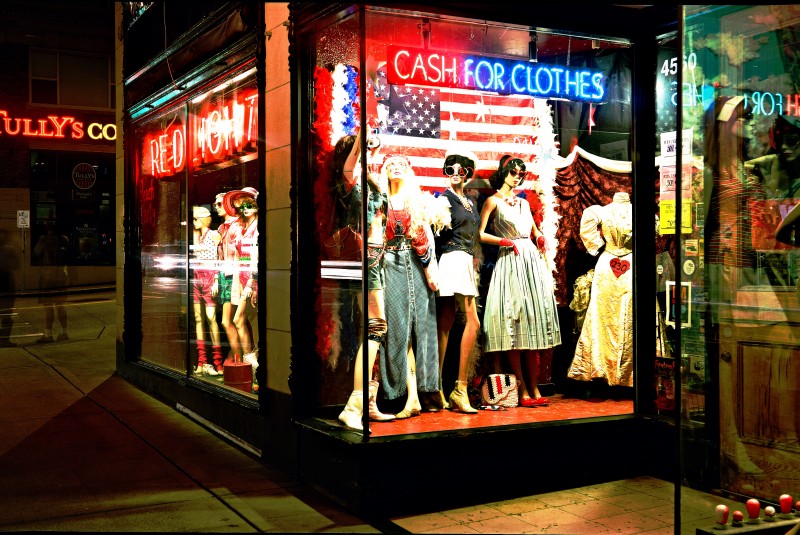 Most of the time, we adjust color subtly, bringing out a nuance here and highlighting  a hue there.  Occasionally, an images has the potential for a wilder palate, with bright colors that call out for us to stick our heads in the paint pot, grab Curves with our hands, and manipulate wildly.

This midnight picture of a University Avenue used clothing display, with its bright window against the nighttime street and garish display of mannikins called for drastic measures.  I shoved Contrast to the max, then twisted Curves like a pretzel, darkening the low values to diminish the street’s presence (unintentionally highlighting the two ghosts who paused briefly during the exposure) and accentuating the colored brightness of the window. Local Contrast Enhancement from Astronomy Tools brought out the clothing detail.  The final product is a picture with something to say!

We spend a lot of time behind the lens. Occasionally – and often because a classic camera attracts attention, and gives us a special legitimacy – we get a chance to become part of the action, and are privileged to be in the picture rather than watching it.

Wandering the streets of Montreal near McGill University, I chanced on one of the professors being interviewed. Sensing a photo opportunity, I brought out my Voigtlander, whose classic Art Deco lines caught the attention of the cameraman. As I caught this image, he saw a fellow professional, and turned to me, asking, “Say, would you mind holding this umbrella for me?”. I found myself standing next to the professor, just out of the frame, holding the umbrella to diffuse the scorching Montreal sun, as he said, “Just a little higher. Now a bit to the left… That’s it! Perfect! Now just hold it there…” as the professor read from her notes.

As the interview ended, I asked the cameraman if he would mind taking a picture of the two of us with the umbrella:

Rand and the Professor

My cameras bring me riches far beyond mere images. The greatest of these is the link with so many people and the adventures that come with them. Some are big adventures, like a magical night with Loretta Lynne’s family; others are small, like a chance encounter on a Montreal street. Yet all become colorful threads in the tapestry of my life, and I am richer for them. The cameraman told us that he recently became a Freelance Cameraman and was thoroughly enjoying his new career. He took some beautiful photos of us, and I knew he was going to be a successful professional photographer.

Photographer’s Note: Carry a notebook! Not only is this useful for recording places and exposures, it also provides a safe place to store names and addresses. Both the professor and the cameraman requested prints, and in the year it took me to review the scans, I lost their cards. 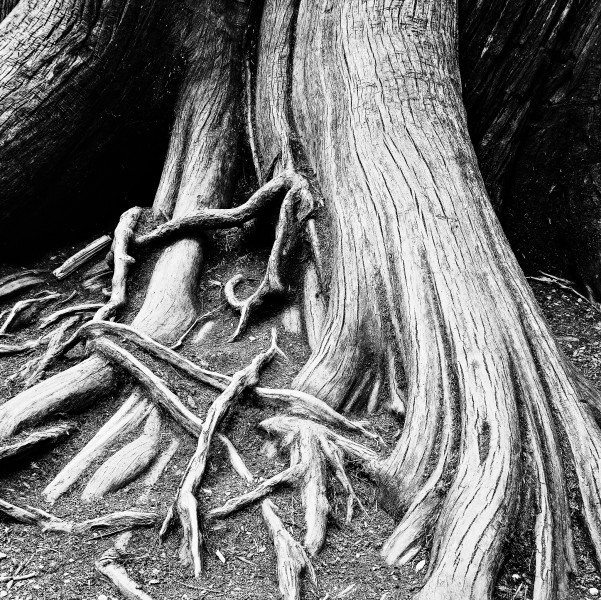 Black and white photography is all about patterns and lines.  Despite their complexity, these roots in one of the remnants of Vancouver Island’s old growth forests caught my eye for the flow of their lines as they intertwine toward the eventual straight upthrusting lines of the trunk.

Natural beauty can often be overwhelming, particularly for photographers.  Sometimes there seems to be nothing to shoot, but more often, there is too much.  This is often the case in my verdant and prolific coastal forests.  Much as an hours’ walk through this forest fed my soul, a sense of frustration grew as I thought that somewhere I should be able to extract a fine art image.  Yet there was always a bush in the wrong place, a fallen trunk in the way – nowhere was there an uncluttered pattern.  At these times, Galen Rowell and Art Wolf run through my mind, and I think sadly, “A real photographer could make something out of this!”  The solution is to find and capture a single element from a complex whole, and build one’s image from that small nugget.  And be patient; give the world time to speak to you about how it wants to be seen.  If you can, revisit the place again and again, in the morning, in the afternoon sun, in the rain, in the midst of a storm when the trees and bushes are tossing about.  Eventually, it will speak to you and you will know what to do.

This is one of the few nature images that I have taken in 6×6 format with the Ensign 820 , and it works well in this case.  It it good to lock yourself into a new format for a roll, and be forced to find images in new places.  XP-2 competently picked up the delicate gradations of line and shadow. Local Contrast Enhancement brought life to the image, followed by minimal cropping of the edges to remove an undeveloped strip on one side.  A significant increase in contrast and a slight drop in brightness accentuated the lighter fine lines of the bark and dropped out distracting detail in the shadows, highlighting the flow of the roots.  Fortunately, the lighting in this forest glade was diffuse sunlight filtered through the forest canopy high above, so there were no highlights to deal with.  On this static subject, I maximized depth of field at f/22 and used a long exposure.