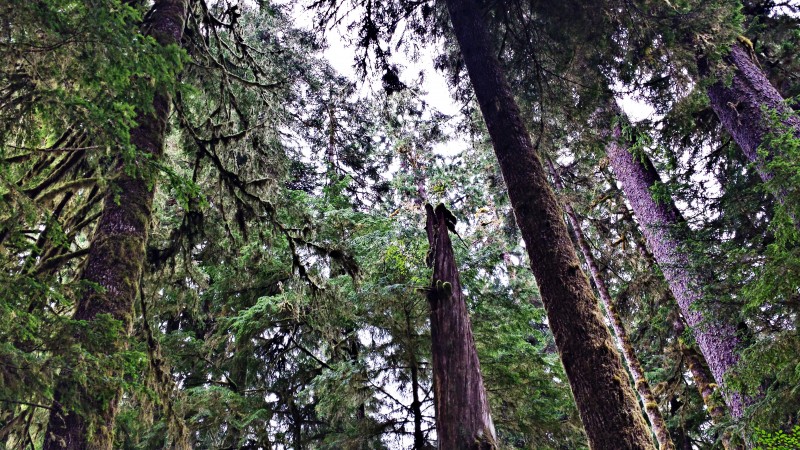 Note: All images are digital with a Samsung Galaxy S4 camera. Film images are awaiting development.

Nestled on the West Coast of Vancouver Island, there is a photographer’s paradise that, like some fabled Himalayan Shangri-La, lies forgotten and largely unknown: The Carmanah Valley. For several hours on a recent visit, I had the entire 16,450 hectares of this coastal rain forest preserve to myself. Yet this remote area is reachable – not easily, but with a little care and determination – in a few hours from the island’s metropolitan centers. 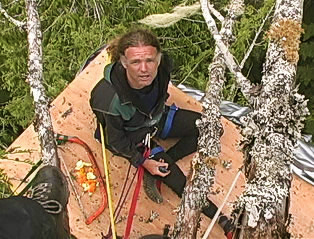 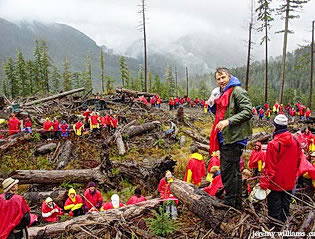 Thirty years ago, protestors chained themselves to trees and lived for weeks in perches 150 feet above the forest floor to create Carmanah Wallbran Provincial Park (https://en.wikipedia.org/w…/Carmanah_Walbran_Provincial_Park), protecting the Carmanah valley from loggers. Today this wondrous expanse of West Coast rainforest (see http://www.cathedralgrove.eu/media/Save_Upper_Walbran_Valley.mov), boasting some of the largest trees in the world, dreams on in a state of neglect. Largely 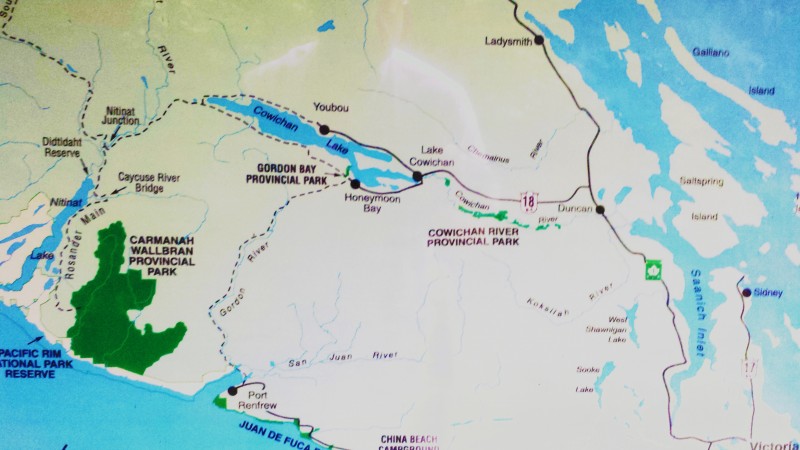 unfunded and completely unstaffed, its only access road was, until a few months ago, overgrown with alders and prone to landslides, and its boardwalks are rotting and covered with moss. Most notices discourage any but the most adventurous:

“…the extensive trail network … has fallen into disrepair, which makes hiking through neglected areas dangerous for visitors and for the delicate natural balance of the ecological systems that comprise the wilderness park. The wooden boardwalks have completely collapsed in some segments of the trail and are succumbing to rot in others. Whole portions of the trails are inaccessible due to the ecosystem’s dwindling ecological integrity; both the protected reserve and non-protected adjacent areas are affected by industrial resource extraction projects such as clearcutting; ….soil erosion, tree blow downs and flash floods occur.”

This seems poor treatment for a reserve containing some of the world’s largest Sitka spruce (up to 95 meters tall and 800 years old), cedar stands up to 1,000 years old, and a unique coastal forest ecosystem.

For two years and five trips through the island’s maze of logging roads, I studied forest maps, mused over Google’s satellite images, quizzed anyone with knowledge of the area, and searched for directions to reach this valley. My last trip in the winter of 2014 was stymied when two massive landslides blocked the road only a few kilometers from the

park. This proved a blessing in disguise, as the road has now been cleared; the worst areas bulldozed and the encroaching brush trimmed. This would have been one hell of a job and I imagine it would have required an excavator brush cutter at the very least. That gives you an idea of the scale of the job.

August 5, 2015, I finally made it, my classic Mercury with its high clearance creeping up rock-studded roads and wallowing through car-sized potholes. 123km (76miles) from my door in Duncan, and the trip takes four hours without a sturdy four-wheel drive vehicle, with speeds down to 3mph in some rough areas – protruding rocks can puncture an oil pan, and hitting a pothole at excessive speed can easily break a standard car’s axle. 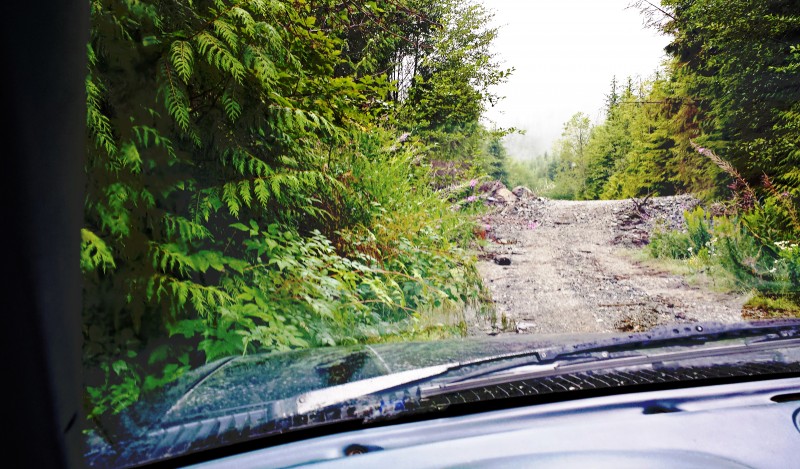 Returning home, one must cross the island on a maze of logging roads in the dark with minimal signage and no road lighting. It is easy to hit a bear or deer; I saw five of the latter and one mouse on the way home, and elk wander erratically across the road near Youbou. However, the trip itself is worth it. Much of the road is in forest, but one passes majestic

maple groves past Youbou. Part of the trip parallels the river, and one briefly encounters the top end of Nitinat Lake where windsurfers can be seen, and the water taxi leaves for the north terminus of the West Coast trail.

Views from the ridges are rare, but one magnificent panorama of Nitinat Lake can be seen, and one short branch closer to the park spreads out a misty vista of the Pacific Ocean, accompanied by the muted boom of distant surf. 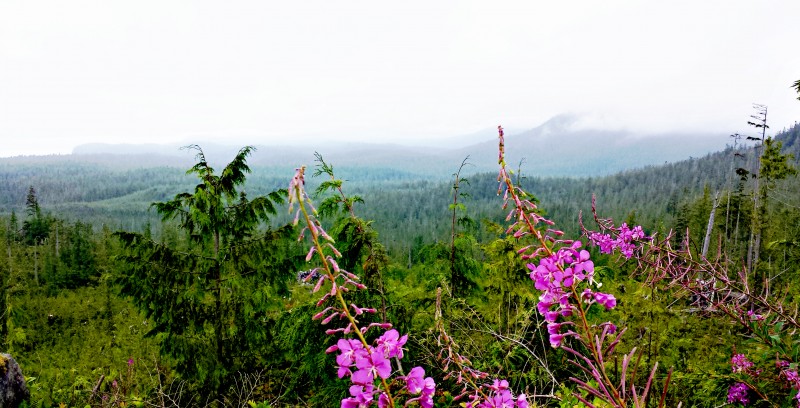 Time only permitted a two hour hike, a couple of Graphic images (still in the can), and some cell phone photos, but the park lived up to its reputation. A magnificent primeval

forest, giant trees disappearing into the cloud in this place of rain and perpetual mists. I saw only one other car in six hours. Where else can one have an entire provincial park to oneself for an afternoon?

Despite the warnings, the few parts of the park that I explored were in good condition. The trail down into the valley was graveled and well graded. As always, I carried bear spray; this is the home of many bears and occasional cougars, and one is an uninvited visitor. Boardwalks in the floor of the valley were mossy but otherwise seemed intact. I did not make it to, or past, the Randy Stoltmann Memorial grove; that is for the next trip. 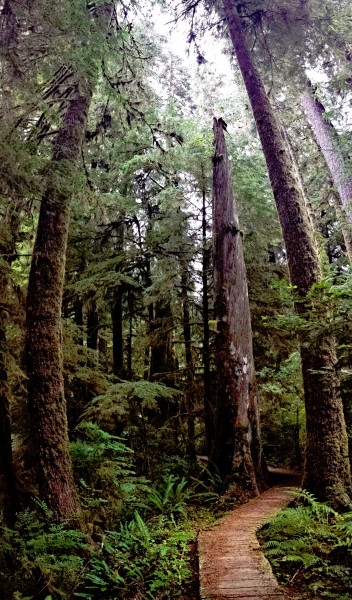 The greatest challenge to photography in such a setting is the complete inadequacy of photographic equipment to capture the sheer scope of the landscape, no matter what vintage of equipment one is using. Here, a classic medium-format press or field camera with tilt and swing may present some advantages over even a good digital camera. However, technology does present an advantage in this setting – I experimented with using my Samsung cell phone camera to do vertical panoramas, which are almost never used. This technique allowed a single sky-to-forest floor image, and the resulting distortion seemed to accentuate the enormous vertical perspective of the forest. 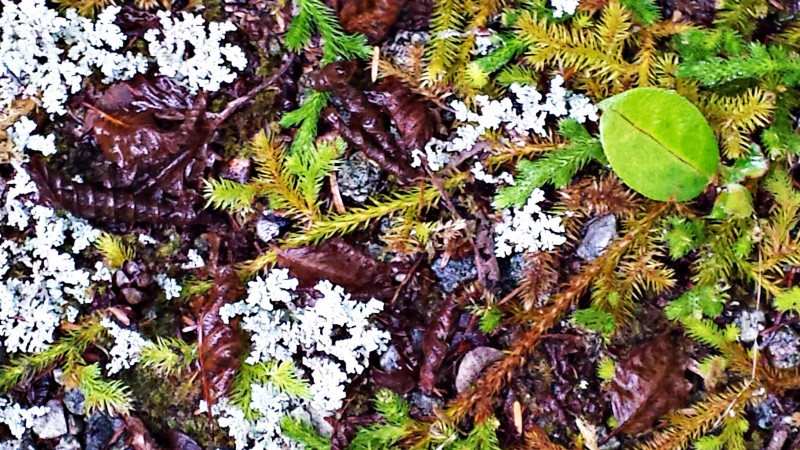 The forest floor is carpeted with fern groves and even graveled trails are overgrown with lichen and club moss.The images posted here are only an imperfect first taste; I will be back.

On the way back, I was blessed again with a sunset and the distant noise of Pacific surf from the outlook atop the spine of the mountain ridge.