I have enjoyed your comments over the last year, and your encouragement has helped me to keep writing.  Each month, I have come up with ideas for posts based on my own technical questions, topics that are not addressed in a coherent manner on the Internet, the images that come my way, and my own quirky photographic adventures.

Now I’d like to hear from you about topics you’d like to see – it’s your turn to drive the ship!

I will be vacationing in rural Newfoundland August 3-18, 2010, and largely out of touch (except when I manage to park our RV outside a little local library that may have Wi-Fi).  I hope to come back with many wonderful images to share with you.  It will be a trip long awaited;  Janie’s family comes from the Gooseberry Islands, a remote island outport now long abandoned, 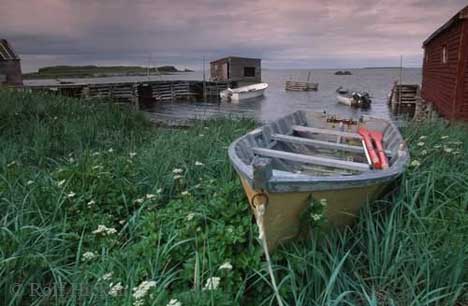 and her grandfather was a Newfoundland doryman jigging for cod in his sou’wester in the 1920s.  We are in Montreal with our cousins, Uncle Tobe has been paired with “…was she Aunt Susan or Susanna…?”, the genealogical charts cover the kitchen table, and the family has been traced back to William Parsons from Dorset in 1768.  We’re set for an adventure!

When I get back, there will be more images to see , plus the occasional adventure and musing on the creative process.  In addition to my Montreal and Newfoundland adventures, I am planning a large section on shutters, both pneumatic and spring-driven, the completion of the restoration and history of the 3A Ansco (which I’ll be polishing on the kitchen table of our Newfie cousins) , and a posting on a fascinating Mexican photographer and inventor.

But this is your turn – see how many ideas you can come up with while I’m gone!

What do a 1920 Newfoundland dory and the engine on the Wright brother’s airplane have in common?

Ye fishermen free that go forth on the sea,
With engines of various makes;
This old jump-spark of mine I will take every time,
You can keep all your new makes-and-breaks.

She was easy on fuel but she kicked like a mule,
And the screws on the bedding were slack;
And we all swore that she’d rise from the floor,
And we feared that she’d never come back.

One evening last fall we went out to our trawl,
It looked like ’twas going to blow;
We turned to go in in the teeth of the wind,
With a three-handed dory in tow.

Tom hove up the wheel and he cursed a great deal,
He cranked till he found of his heart;
He tested the oil and examined the coil,
But the devil of it would she start.

‘Twas coming on night, with the seas feather white,
When up to us rowed a small skiff;
And a bedlamer boy with a cast in his eye,
Kindly offered to give us a lift.

The kid stepped on board with the air of a lord,
His movements unhurried and slow;
He noted the string and the window blind spring,
But he got the old Coaker to go.

Go, go, he makes that thing go,
How he does it I’m sure I don’t know;
We can race with the Clyde and keep her alongside,
When he coaxes that Coaker to go.

So we shipped on the kid, and I’m sure glad we did,
Now it’s seldom we ask for a tow;
He gets a full share which I think only fair,
For coaxing the Coaker to go.

Go, go, he makes that thing go,
How he does it I’m sure I don’t know;
We can race with the Clyde and keep her alongside,
When he coaxes that Coaker to go. 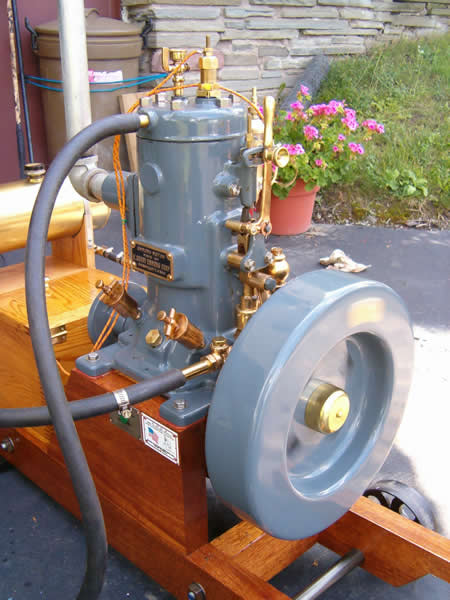 Variant of The Six Horse-Power Coaker by Arthur R. Scammell (1940)

This variant sung by Eddy Primroy [1928-1999] of Pouch Cove, and published in MacEdward Leach And The Songs Of Atlantic Canada © 2004 Memorial University of Newfoundland Folklore and Language Archive.

Originally published as The Six Horse-Power Coaker in Gerald S. Doyle’s Old-Time Songs and Poetry Of Newfoundland: Songs Of The People From The Days Of Our Forefathers (Second edition, p.74, 1940).

From the Dictionary Of Newfoundland English:
Bedlamer boy — a youth approaching manhood; applied rather contemptuously to young fellows between 16 and 20; derived from the French bête de la mer (beast of the sea) used to describe a half-grown seal.
Coaker — a gasoline-fueled engine used in fishing boats ca.1920, and named for Sir William Coaker, founder of the Fishermen’s Protective Union (FPU) in Newfoundland.

Thanks to Rolf Hicker for the use of his image.  May I suggest that you visit his gallery of Newfoundland images at http://www.hickerphoto.com/photos/newfoundland-labrador-pictures.htm?

4 thoughts on “Readers’ Requests… and a Trip to Newfoundland!”