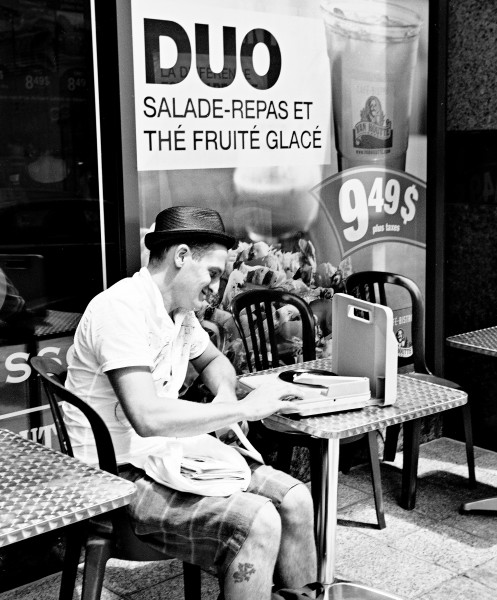 Street photography with a roll film camera connects me with the tradition of Eugene Ateget, Henri Cartier-Bresson, Walker Evans, and many more of photography’s great figures.  And besides, it’s fun.  And challenging, requiring a delicate mix of friendliness, diplomacy, chutzpah, and, at times, plain, downright sneakiness.  The last ingredient is probably the most important, as having the subject become aware of you often ruins the moment.

A traditional, mid-century vintage camera heightens the challenge and taxes one’s ability, both as a person and an artist.  Meter in the sun, remember two stops open in the building’s shade, choose a shutter speed to handle both environments.  Abandoning the safety of a telephoto lens’s distance (most vintage lenses are 50mm equivalent), you must get close to your subject and either charm him, or be quick and unobtrusive.  One develops the instincts of a wolf or panther stalking its prey.

Montreal streets are rich hunting grounds for the photographer.  One hot afternoon, I passed this gentleman at a sidewalk cafe table, black porkpie hat perched on his head, completely engrossed in the music from a small vintage record player.  My Ensign 820 ready with its shutter cocked and exposure set for Quebec’s bright summer sun, I caught two images without being noticed.

This was a difficult subject, as the wrong angle (my first image) caught distracting reflections of passing cars from the window.  My second shot, more by luck than careful planning, included only dim images of the inside of the cafe.

Processing required cropping out a modest amount of distracting detail from the periphery: the subject’s and the table’s feet at the bottom, the top of the window, and part of the window’s lettering on the left.  An increase in contrast livened the overall effect.  The 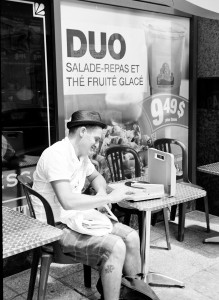 greatest challenge was bringing out the white shirt’s detail in the slightly thin negative, and darkening the few window reflections and visible inner details of the cafe.  This was accomplished in Curves by delicately lowering the  spike in the highlights section of the histogram, thus bringing out the folds in the shirt, and slightly accentuating the darker values, thus obscuring the dark reflections and dim interior details of the restaurant.  There is still a mild amount of burnout in the details of the shirt, but this is acceptable given the harsh summer sunlight.  The mid-tones were altered slightly to minimize pale distracting reflections  behind the subject’s head.