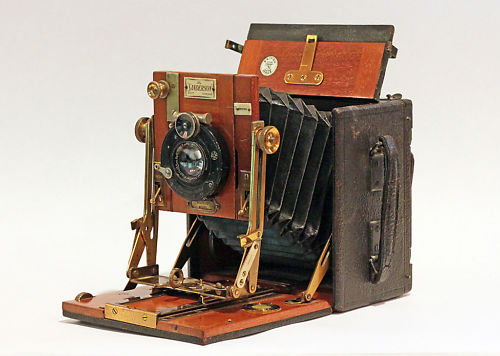 Like most of us, I shot film until digital came along, and then my backpack of expensive German glass languished in the cupboard for years. That lasted until five years ago, when I bought a 1920 Kodak for $10 on eBay and ran my first roll of film through it. Although light leaks and bad exposures plagued most of the frames, one image of an antique gas station was excellent, with pleasing color and subtle tonal gradation. I was hooked. I realized for the first time that equipment from the early part of the century could produce striking, professional-quality images. Better yet, I achieved beautiful results with both black and white and color film. As a result, most of my work is now done with my collection of cameras made between 1900 and 1930. They don’t just sit in their display cabinets, either. My cameras, the result of many hours of patient restoration, are old and beautiful, but they’re like sled dogs- they work for a living. 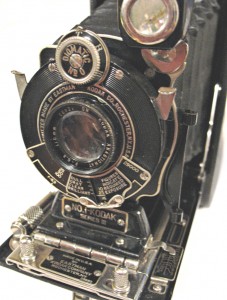 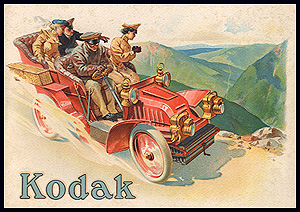 I began this site to share with others the wonderful rewards that I have gained from working with these old masterworks of brass, glass and leather. Not just the pleasure of owning or collecting them, but of actually using them and seeing the wonderful images that they can produce. I hope to share with you what I have learned about finding usable old cameras, some tips on cleaning and restoring them, and what I have discovered about using them.   In between, I may add some thoughts on the creative process and a few stories about my adventures as an itinerant fine art photographer with a funny-looking camera.  I hope that you find even a fraction of the rich pleasure that I’ve gained from these wonderful old machines.

More than just the cameras and the images, this blog is about the adventures that I have had and the people that I have met.  Owning and using a vintage camera is more than just about finding memorable images – wherever I work, on a sunset seashore or on the busy streets of Seattle, people come up to me an ask me about my cameras.  Older folks smile and say, “I had one just like that”, remembering snapshots of a special occasion.  Young people may never have seen a film camera before, and you can see their wonder as they peer though the viewfinder and follow the intricate folding linkages between their finger and the shutter.  They are not just fine old cameras; for a brief moment, they allow lives to touch, and while you give something, you come away with so much more.

Remember as you read that this site is a living organism, constantly growing and changing. Rather than waiting until posts are in their final, polished form, I have published many of my longer, technical posts as works in progress, sharing their growth with my readers as my own thoughts, discoveries, and learning processes evolve. Overall, I have tried to keep the blog in a format of informative,technically-oriented articles separated by images and discussions of the creative process involved in each image. Eventually, the blog format may evolve into a more formal web site.

Note-  This posting appeared in modified form in the Fall 2009 issue of Canadian Camera magazine.

12 thoughts on “Welcome to Through a Vintage Lens”